A new era of "Metaverse Events" - i.e. the organisation of online events in the so-called metaverse in 2022. 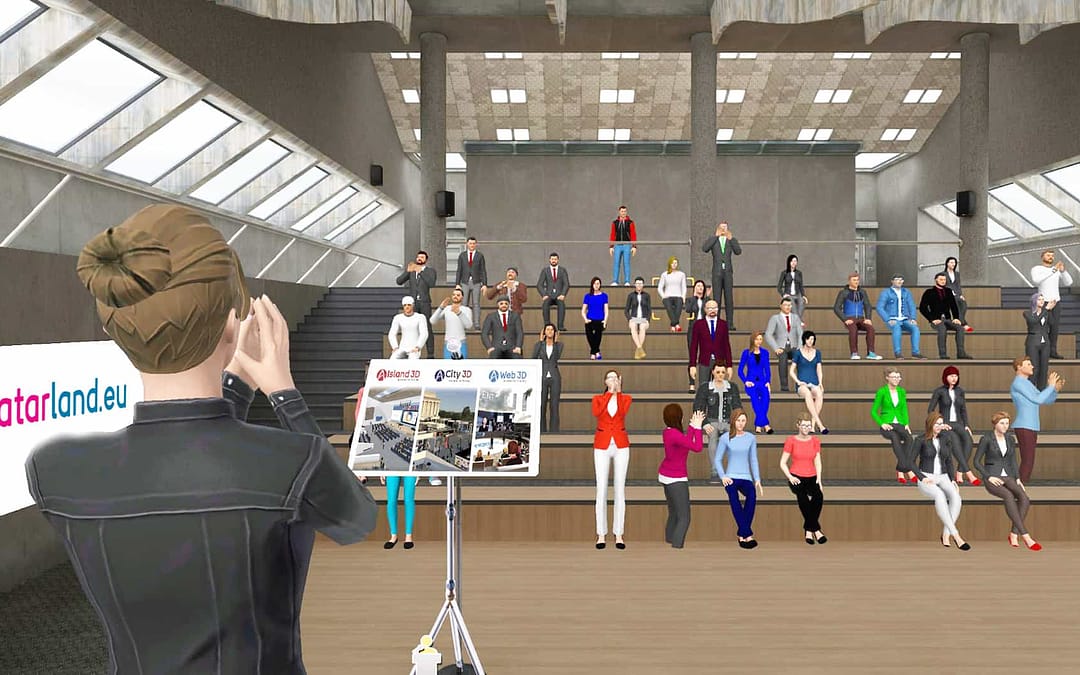 What is the metaverse and what does it have to do with organising online events?

Metaverse ? this is how Mark Zuckerberg (founder and chief executive of Facebook) calls the three-dimensional, virtual space that is about to expand and, indeed, replace the Facebook environment in a single integrated virtual world. The Facebook, Instagram and Whats-up environments in one integrated virtual world. Is this possible? What could it look like? What benefits does this phenomenon have for the events industry? Which companies have the courage? dare to create their own interiors in a virtual space? And finally, who is ready for such solutions?

Online events in the metaverse? Well not just events...

Interest in metaverses expressed by the number of Internet searches by. Google Trends has reached its peak in the autumn. 2021. The media, including New York Times, Washington Post whether The Guardian publish dozens of speculations on what this world might look like.

Technology and media giants like Apple, Google, Microsoft, HP, Nvidia, Adobe whether Disney The first prototypes of their own metaverses begin to be created and demonstrated. In line with the new trend, declarations to join the metaverse world have already been made. Coca-Cola and VISA.

Sam Zuckenberg (Meta formerly Facebook) is already letting the first beta testers in the USA into his new world. The world has clearly accelerated in this category.

Why the sudden twist and turn to metaverses?

The year 2020 and the pandemic ravaging the world have obviously forced us to make many changes and to move our activities online. Have we, in a single moment, jumped five years ahead in our ability to work remotely? - said Verizon CEO Hand Vestberg at CES 2021.

Let's start with the origins of the Metaverse itself?

Note: this is not a new?! Such virtual platforms have been in existence for almost twenty years. VSide(2004), Twinity(2008), IMVU(2004)or the most famous Second Life (2003) are virtual places where, just like in the metaverse, we are avatars and meet other people in a 3D world - against the backdrop of a city, a tropical island or a space station.

Interestingly, specialist solutions have also been available for over ten years dedicated to the events industry. For example, the metaverses available in our Avatarland: Virbela (2012)VirtwayEvents (2014), MootUp (2010) or Virtuworx (2010). Users access these worlds by installing a dedicated application or simply from their web browser. Avatars can talk to each other, take part in events and participate in the development of the virtual world. Avatars can talk to each other, participate in conferences, trade fairs and training sessions, and during company integration they can play hide-and-seek, go boating, play football, dance in a music club or play in an escape room. These are already powerful and versatile tools for organising online events, and with the wave of announcements of big brands entering the topic, it is becoming more and more popular.

The world that Zuckenberg's company is creating is no longer just an online conferencing platform. It is intended to have even greater possibilities and will in its power lead to the creation of a single space for the communication of services and technologies in parallel. to create a single space for the communication of services, services and technologies in a parallel world that combines reality with virtual space. and virtual space. To enter the digital world you will need: the Internet, a computer or smartphone, and optionally you can also use VR/AR goggles or glasses.

Why do we need a new online virtual world?

This brings us to the heart of the matter. Why do we need a second 3D Internet world? Obviously, it is a new industry. An industry and another milestone in the development of communications and the Internet. This is business as usual - a new space to be developed and filled. We are coming here for new experiences, for new experiences, for a new dimension of spending time with friends. A little bit for the trend, for change and to give direction to the development of the modern world, and a little bit out of curiosity or necessity - if you are employed by a company based in the metaverse.

Sounds unrealistic? Not at all, such companies already exist, and the well-known Deloitte company, for example, already has its training centre in Warsaw.

The original design by Meta (formerly Facebook) is Horizon Worlds - Here, teams of avatars meet in the middle of a 3D city, which requires the use of Oculus VR goggles. There they learn how to There they learn to nail fist bumps and grasp virtual bottles in their hands. The graphics are not yet available. - It's a complete disappointment, because it's very different from the visuals presented in the trailers and commercials.

Much more mature graphics are already available in "metaverse events" platforms, such as the worlds available in Avataraland. Horizon Worlds is, at the moment, a light-hearted start, a tool for testers and the most curious technology fanatics. Anyway, once there's something to see, the city will be filled with services, companies, attractions, and probably everyone will be fighting for the viewer's attention. This can and certainly will be a very interesting experience in the future.

Further digitalisation of our lives and online meetings

Zuckerberg has announced that the new world will have over a billion users within a decade. Is this realistic? Experts say yes, as the next stage in the digitalisation of our lives. We can achieve this quickly. We can quickly reach this point of interest, especially in a world where there is still a pandemic and the development of technologies for organising online events is growing at a rapid pace.

Today, we are no longer surprised by online banks, ordering food to our doorstep from our mobile phones, or finding a rental car nearby and starting it up with a keyless phone. We order almost everything over the Internet, from a fridge to mascara. As we spend more and more time on the Internet and online services, it will probably become more and more difficult to give this up over time. ? Therefore, the development of services in the online world seems to be the natural way forward.

So why shouldn't such technology jump into the world of events, festivals and concerts? There are already such attempts: have you seen Travis Scott concert on the Fortinite platform in 2020? The equally famous and huge Tomorrowland festival, cancelled due to a pandemic, was held in a virtual amphitheatre making an incredible impression.

Will we live in a metaverse when?

Going further, creating your own virtual home, space or workspace will be an attempt to realise the dream of every celebrity or international company. The dream of every celebrity or multinational company comes true. Virtual artists such as Shanghai Henian's Luo Tianyi are worth billions of dollars. In virtual space, your best friend could be an AI bot such as KukiAnd non-removable tokens (NFT) have already revolutionised the concept of digital property. Something can be worth a lot without any traditional material value - even if it doesn't physically exist.

The world of film, media and games also wants to make its mark on the metaverse

By 2025, the games market could become a $300 billion industry, according to GlobalData. That's three times the global film industry's record of $101 billion in 2019. Gaming metaversions are reportedly planning to replace TV and even Netflix for the younger generation. The UK interactive TV broadcaster is already offering new content to watch on Fortnite Creative, recreating the popular game show The Void. If you are interested in new concepts for developing 3D entertainment, you can also take a look at the series ?Upload? available in Amazon's Prime library. Netflix has already created an interactive world of the series ?Stranger ThingsThe new medium of Metaversum is intended to be a mix of streaming and gaming. The new Metaversum medium is intended to be a mix of entertainment and interactivity. And I'm looking forward to this change.

The report ?Into the Metaverse?

Metaverse pools and the scale of new business

Video games in particular are becoming a place to meet online. Xbox in May 2021 explored this phenomenon and nearly 76% Brits confirmed that online meetings in games or virtual platforms are a place for casual networking, and 84% Chinese said that such technology deepens relationships with friends. 84% Chinese felt that such technology deepens relationships with friends. Fortnite, Sea of Thieves, No Man's Sky are just some examples of friendships that run into the millions to spend time together. Don't you think that this world is getting a little weird?

MetaSpaces This is the area of virtual spaces. This is where concerts, exhibitions, fairs for intangible goods, traditional conferences and virtual team-building events will take place. Impossible? Not at all; in the course of 1.5 years, we have organised almost 50 events in the virtual conference centre, and that on just one platform! We have already held our first virtual fashion show, thanks to a virtual fashion shop. A virtual clothing shop. IMVU. The IMVU virtual shop features 50 million products created by over 200,000 creators. (Fourteen billion in credits, or $14 million, exchanges over 27 million transactions every month).

In MetaSpaces there will be equivalents of natural and architectural wonders and destinations that not everyone can fly to. Seoul has already announced that it will create its virtual city in the metaverse.

Organisation of events in the metaverse

The March 2021, South by South West (SXSW) conference took place in a 3D designed world in Austin. The virtual world, accessible from the Internet and VR goggles, was operated entirely by virtual avatars. Over 100,000 viewers were able to manage their own navigation through the platform. They navigated the platform between films, live screenings, rooftop happy hours, theatre performances, speeches and workshop sessions. and workshop sessions. There were even some attractions that are impossible to do in real life: drone tours to get a bird's eye view of the event.

And all this is only the beginning of what awaits us...

METAWERS The next version of the consumer internet and virtual sharing. Business giants are rubbing their hands. Investment funds are massively supporting the financing of the development of this technology. Where will this take us? We shall see... One final thought: when we were kids, we used to meet on the back porch or the football pitch. Nowadays kids meet each other in Minecraft, Roblox, and soon they'll start doing it in Horizon Worlds, among others. Clearly we need this - these are the times? The development of our civilization can't be stopped, and the creativity of virtual technology developers is a force to be reckoned with. The creativity of the creators of virtual technologies is an inspiration for the future, which slowly begins to overtake our imagination of the future a dozen years ago. We live in very interesting times!

In the New Year 2022, we wish you only lucrative metaverse projects and more!